As some bottlenecks ease others are just starting, meaning the post-pandemic economy ‘won’t return to normal any time soon’. 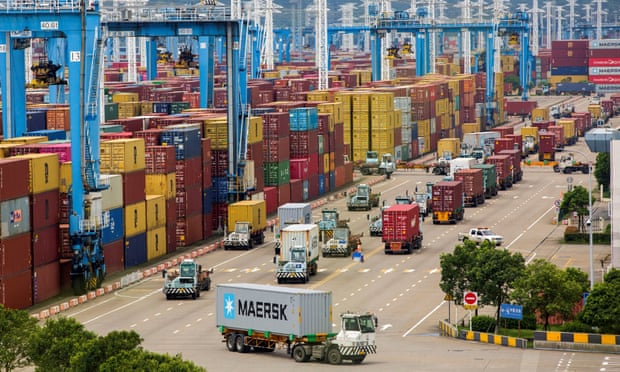 In Britain it’s alcohol, in Canada it’s maple syrup, while in Australia it’s a crucial additive for diesel trucks, and in New Zealand it’s brown sugar. These are just some of the many shortages affecting consumers and businesses around the world as industry experts warn that the supply chain crisis prompted by the coronavirus pandemic could last for many more months and even up to two years.

Although there are signs that some bottlenecks are easing, the onset of the Omicron Covid variant could lead to new shutdowns, sending another disruptive spasm through the global system.

The gravest appears to be an outbreak of Covid this week in the Chinese manufacturing hub of Zhejiang, which is home to the world’s largest cargo port, Ningbo-Zhoushan. Tens of thousands are in quarantine under China’s strict zero-Covid policy and some local authorities have urged workers not to travel home “unnecessarily” for lunar new year festival in February. “Further supply chain disruption is a significant possibility,” economic analysts at Capital Economics said in a note.

Maersk, one of the big three shipping companies, said the worst delays were still on the US west coast where ships were waiting four weeks to unload due to the lack of workers on land. 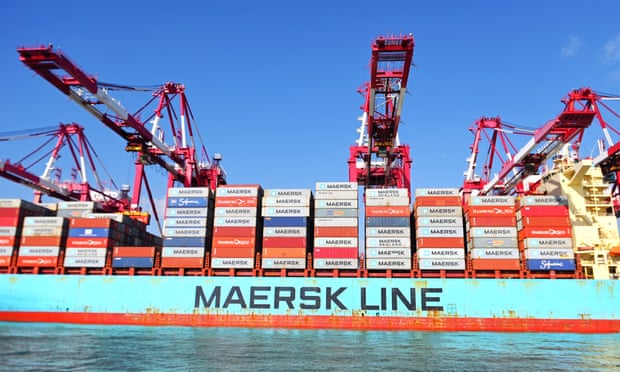 Maersk says the worst shipping delays are on the US west coast. Photograph: Barcroft Media/Getty Images

This creates a chaotic “ripple effect” around the world with ships locked into tight deadlines and a glut of containers in some ports in the US and Europe, but not enough in ports throughout Asia.

“With winter, year-end holidays in North America and Europe, Chinese new year in Asia, the already stretched supply chain will get even further stretched as workers, truckers and terminals are off for holidays,” a Maersk spokesperson said.

“Normally we can absorb these seasonal impacts fairly quickly, but when already stretched, it just becomes a multiplier,.”

“We do not see major improvements as long as we have line of sight, which is into 2022 … Very likely that it continues thereafter and for North America even longer.”

In Felixstowe, the UK’s biggest container port, the dockside remains clogged with containers waiting to be emptied, meaning that empty containers coming back on trucks from inland warehouses have to be diverted to other ports.

Robert Keen, of the British International Freight Association, said driver shortages were being felt all over the world with port infrastructure not keeping pace with the container vessels. Covid was “an ongoing problem”, he said.

Flavio Macau, an associate professor specialising in supply chains at Edith Cowan University in Western Australia, said that fine-tuning could take years and that the world economy was still suffering from a kind of “high blood pressure” as it lurched from one disruption to another.

“Lockdowns are hopefully a thing of the past outside China, but there are still all kinds of restrictions in place to the movement of people, including workers with in-demand skills.

“My view is that supply chains still have high blood pressure, consistently showing arrhythmia. It will take to mid-2024 to get back to “normal’.”

As well as the possible shortages of Christmas drinks and sugar for festive treats, economies such as the UK and US are facing rising inflation across a range of goods from energy to apples as a torrent of demand puts pressure on insufficient supply.

Shipping accounts for the movement of at least 90% of goods around the world and the cost of transporting things by sea has rocketed in the past year. For example, the Drewry world container index measuring the cost of moving a 40ft container is 170% higher than it was a year ago. The price on some particularly in-demand routes such as Shanghai to Rotterdam has increased by almost 200%; in the case of the Dutch port to New York, the cost has risen by 212%.

Basic consumer staples are spiralling in price because of higher shipping costs and heightened demand from consumers stuck at home for months and unable to spend any money on treats such as holidays and nights out. Coffee prices have doubled over the past year, according to current data, as has the price of oats. Lumber, cotton, wheat and palm oil have all risen by more than 30%.

Not surprisingly, inflation has touched decades-long highs in western economies such as the US, Britain and Germany, bringing calls for an end to the ultra-loose monetary policies pursued by central banks since 2008.

Roy Cummins, who has worked in logistics for 30 years and until recently was chief executive of the Port of Brisbane in Australia, said there was some sense that things were improving but he estimated that constraints on the international shipping network were unlikely to be alleviated for the next two years.

His point is illustrated by the bottleneck of giant containers that has built up off the west coast of the US. With so many ships unable to dock and unload, more than 80% of the 434,000 20ft containers exported out of the Port of Los Angeles in September went out empty. Shipping companies can make up to eight times more money taking goods from China to the US, so it made sense to get the containers back to Asia rather than wait for them to be filled.

This has fulled huge imbalances throughout the system, he said: “The supply chains were discombobulated. Shipping capacity was quickly exhausted at the start of the pandemic because everyone planned for a big decline in demand but in fact there was a surge because people wanted to buy things. Then the supply side was hit hard with ports, warehouses and truck companies all short of workers.

“But you can’t flick a switch and get new capacity back on. New ships are not ready until 2023. Shipping supply should normalise within a year but does the economy normalise?”

Tiffany Compres, a partner at international law firm FisherBroyles based in Florida, said: “It will take time to get better, for companies to adjust, and for the legal framework to adapt. To add to the challenge, this is very much a political issue, and nations will need to cooperate to really get us to a new sustainable way of operating the supply chain. It seems to be a tall order in our polarized era.”

Before the pandemic struck, the shipping industry had driven down the cost of transporting goods and had perfected the celebrated “just-in-time” system whereby commodities and spare parts were moved seamlessly around the globe and delivered exactly when and where they were needed. This reduced corporate costs dramatically, for example by reducing or completely eradicating the need for on-site warehousing.

If the uncertainty continues and consumers carry on with online shopping splurges, Cummins says, “you will see ‘just-in-time’ becoming ‘just-in-case’ as companies build up inventories to guard against disruptions”.

Dennis Unkovic, a US corporate lawyer, trade expert and author of Transforming the Global Supply Chain, says the Covid crisis had shown that the system was dependent on a just-in-time model designed to run perfectly, “but that’s not what’s happened”.

The deterioration in relations between the US and China which led to trade tariffs and loss of trust was also having a bigger impact than hitherto recognised, he says, dislocating the mechanics of world trade that have been taken for granted for many years. Cyber-attacks and robotics have also made companies review their supply chains and source materials closer to home.

“For anyone expecting the post-pandemic world to return to ‘normal’, forget it. Whatever was considered normal before the pandemic is not coming back.

“Companies have to make the supply chain a priority,” he says. “If it breaks down we can’t say we didn’t see it coming.”