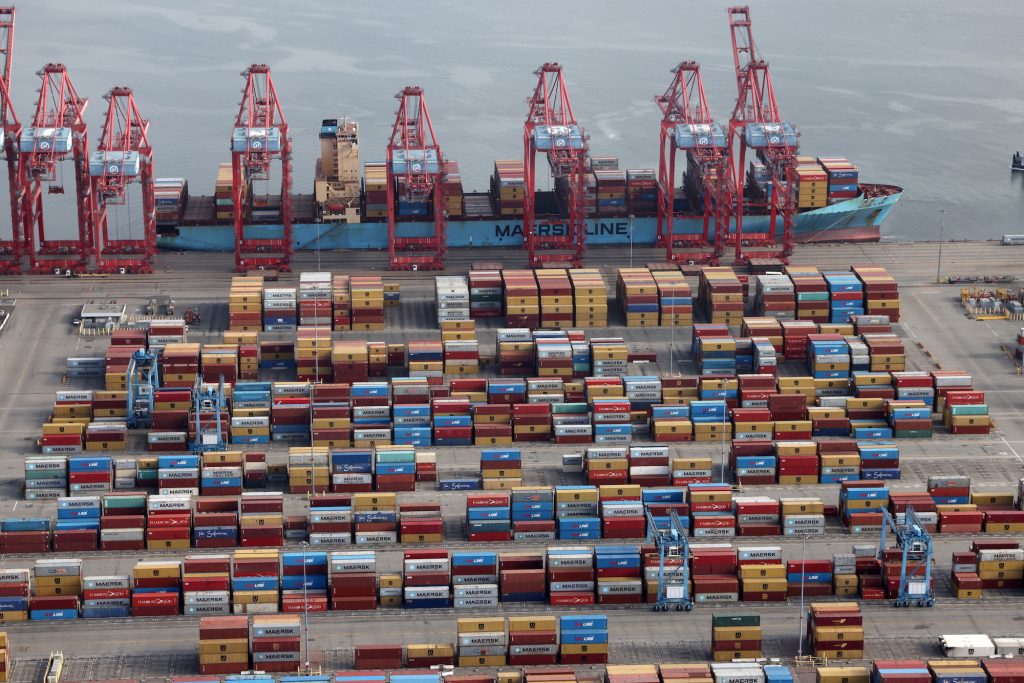 If it seems like shipping delays and soaring delivery costs aren’t getting any better, it’s because they’re both getting worse.

Throughout the pandemic, blame for global supply-chain disruptions has bounced from Covid-19 outbreaks to container shortages, from spendthrift Americans gorging on garden tools to a massive ship beaching itself across the Suez Canal in March.

Those are still causing problems, but there’s a new hiccup that threatens to prolong the pain, maybe even long enough to upset Christmas shopping: The key export hub of Yantian in the heart of China’s factory belt was partially shut down in June to control virus cases, shrinking what little spare capacity existed in an industry that moves more than $4 trillion worth of goods across the global economy each year.

“The latest one is the worst in terms of the supply-constraint hits,” says Steve Saxon, a McKinsey & Co. partner in Shenzhen, China. He reckons it could be a month before Yantian is fully operational again, with the fallout rippling to other ports.

That means container shipping rates could stay high and delivery times could get stretched out even more heading into the peak season for inventory rebuilding in August, when retailers like to stuff warehouses with year-end Christmas items.

“U.S. importers at the moment are panicking,” Saxon says. “People are already worried about whether they can the shipping capacity in August and September so they’re trying to lay their hands on whatever capacity they can get now.”

He expects consumer demand in the U.S. will remain “reasonably high” through the rest of the year, with the main question being whether a supply side that’s “still creaking” can handle it.

“I would not predict another Suez — that feels like a true black swan,” he says. “But another port closing down and reducing capacity because of Covid is certainly foreseeable.”

With that dose of reality, here are six shipping signals to watch in the second half of the year:

Port Congestion. It’s not just bad off the coast of Los Angeles and Long Beach, California. Ships waiting to offload are parked outside ports from Singapore to Savannah, Georgia, and big European gateways for trade like Hamburg, Liverpool and Rotterdam are dealing with bottlenecks and delays, too. Dozens of ships are queued up around Yantian and, by one estimate, more than 400,000 20-foot containers were brought to a standstill.

So even as Yantian resumes normal operations, experts like Alan Murphy, CEO of Copenhagen-based of Sea-Intelligence, said the shockwaves might be felt far and wide. “There are literally hundreds of thousands of containers piling up in South China, while the other ports are already stressed to the max, and we have an acute shortage of both vessel space and empty containers, so the South China port situation is rapidly becoming a massive systemic disruption,” Murphy said in an email earlier this month.

Container Rates. You’d be forgiven for mistaking the next chart for a couple of hot cryptocurrencies but unlike the value of Bitcoin lately, record-high container rates are marching only higher. A notice this month from Germany’s Hapag-Lloyd AG offers some perspective: Starting July 18, it will place a “peak-season surcharge” of $2,000 for each 40-foot container from East Asia to the U.S. and Canada — an extra fee that by itself is higher than the full rate for a container shipped on transpacific routes in 2019.

The problem is there still aren’t enough steel boxes to meet the demand on the most sought-after routes, particularly from Asia to the U.S. With Europe’s reopenings gathering pace, the strains may get magnified. “Europe is by no means immune to the capacity problems,” Saxon says. While shipping lines have deployed all their resources and have ordered hundreds of thousands of new containers, those are coming online only slowly and won’t ease the current capacity crunch very much if ports can’t handle the extra volume.

Freight Expenditures. It’s not all about ships. According to Craig Fuller, CEO of the information and data firm FreightWaves, imports account for as much as one-fifth of trucking volumes. “When you see this massive amount of imports hit the freight market, it creates an enormous amount of strain in terms of trucking capacity or trucking demand,” he said on a recent episode of Bloomberg’s Odd Lots podcast. There aren’t enough drivers in many countries, and shortages of equipment like chassis to haul containers are particularly acute around ports.

Even with all the supply constrains, North America’s freight cycle “is in high-growth mode,’’ according to the latest monthly report from Cass Information Systems Inc. Its truckload index has hit three consecutive record highs and might rise further. “U.S. capital-goods orders have recently broken through a generational ceiling,’’ according to the Cass report. “We believe this portends an unprecedented U.S. capex boom. So, even as federal-stimulus effects fade and consumer spending gradually reverts back to services from goods, the extraordinarily strong U.S. freight recovery across the network in 2021 also has longer-term growth drivers.”

Low Inventories. Some economists theorize that as countries reopen and travel restrictions are lifted, consumers will reduce online purchases of stuff and head off on vacation, easing the crunch in the global trade of physical goods. But the pandemic is rewriting old theories. Among the corporate casualties of Covid-19 is the just-in-time inventory model — a strategy justified if there’s cheap, reliable shipping on command. As the next chart shows, inventory-to-sales ratios are near historic lows. That’s largely because supply can’t keep pace with demand.

Lean storerooms aren’t a problem if you know exactly when your next convoy of containers arrives. But such certainty is also scarce these days, and no logistics manager wants to tell to the boss they’ve run out of something. So the drive to pad inventories might underpin demand even as people splurge again on holidays and entertainment. “As some businesses look to carry higher stocks — beyond typical levels of inventory — there is a risk that this could lead to further increases in competition for components and raw materials that are already in short supply,” HSBC trade economist Shanella Rajanayagam says.

Carrier Profits. An industry is having a banner year when the worst stock performance of the lot is a 34% gain nearly through the first half of the year. That’s the year-to-date performance of A.P. Moller-Maersk A/S, the Danish container line that’s currently the top player measured by global container capacity. In the midst of the industry’s most profitable run yet, the shares of eight other publicly traded rivals are having even better years, according to Bloomberg data, with Taiwan-based Yang Ming Marine Transport Corp.’s shares taking the title with a 416% increase so far this year.

Operationally, it’s been a nightmare “but they’re having a commercial bonanza,” Saxon says. This is a sea change from a decade of losses, bankruptcies and mergers that sheered the playing field from about two dozen major carriers to the current concentration of about 10 that control 85% of the market. After all that consolidation, rate-cutting wars should be less severe and capacity ought to be easier to match with demand, analysts say.

Ship Building. With all the money being made, carriers are indeed placing a lot more orders for new vessels. Granted, this isn’t the heyday of 2008, when the orderbook was filled with more than 1,200 ships. Last week, Hapag-Lloyd said it’s doubling to 12 the number of ships it’s purchasing from South Korean shipyard Daewoo Shipbuilding & Marine Engineering Co. Each will carry more than 23,500 20-foot equivalent units of containers. That will add capacity to the market — but not until delivery in 2024.

For an industry that’s struggled with boom and bust cycles, these numbers will be interesting to track to see if overcapacity occurs again, ushering an eventual decline in ocean freight rates. For the near term, though, shipping headaches may linger. “The effects of disruption at Yantian will only now start to flow through, and could exacerbate existing congestion at major ports in a few weeks,” Rajanayagam says. “It certainly wouldn’t hurt for consumers to look to purchase products earlier than normal this year.”